Well there were several names I might have chosen for my smart surfaces blog. These were the top three contenders:
"I swore I'd never take a 6 hour class again"
"Achieving Ulcers and Grey Hair"
"Creative Negotiations"
But in the end, "It's like Inception...except we're not dreaming." won. It wins for many reasons, but the reason that sticks out in my head at this very moment is the way the team in the movie had to work together and trust each other to accomplish their crazy goals. This course demands the same of us.

So week one is now over, and we present today. Quite frankly, theres a ton to talk about, so most likely in a day or so I'll be revisiting the topic of it later. Right now I'm going to toss in a little bit of what occurred on Day 1...

It was pretty awesome. I got the chance to begin working with an arduino, which, frankly, I know nothing about, although I'm working on it. Then we got smashed into groups and were given an hour and half to create a something of cardboard. Our three words were Wind, Inflating, and Daily. We had two A & D kids, one engineer, an informatics major, and three architects if I rightly recall. Honestly? I thought that hour and a half was hysterical. I think if we had filmed ourselves, we would have HAD to laugh at how we worked. It wasn't bad or anything. But we talked for so long! I found that everyone was really theoretical, and wanted to just simmer in the conceptual ideas of wind, inflating, and daily. Form and context were missing for over 3/4 of the time. It was so much like CFC 1, I think I did laugh. So we talked, and had professors stroll by and give us looks of something like bewilderment and doubt. Then they'd ask "What thoughts do you have?" And we'd mumble something, but really, bottom line we'd have nothing. Then they'd ask "Are you going to build something?" And someone would half heartedly say yes. And then I think it was me who went and grabbed cardboard and covered everything on our table with it, saying (cheerfully i think) "Let's get building!" And gung-ho Steven jumped in first. And then Mic joined him, and then I came to the floor, and one by one we trickled down to putz. We knew we tight on time, and we knew we had a few ideas to pursue to see what actually could work, so there were about four ideas being worked on simultaneously. Each of us would jump from one idea to another to contribute or show what we were working on. Eventually, we hit crunch time. We snagged one idea, and said "THIS WILL HAVE TO DO!" and then used the next 10 minutes to swiftly throw it together for presentation. And actually? When John Marshall asked if any of us were proud of what we had made? I was. I didn't raise my hand (COWARD) but I was. Gosh dang it, we had a relatively swell idea in an hour and a half! We made a model that wasn't that pretty or functional, but it had all the parts! I was stinking proud!

I think I was proud because I know that when I design something, an hour and half is a rough estimate for me beginning to think. So day one came to an end, and the bottom line is that I thought our group had potential. We just needed to work out our rough edges. 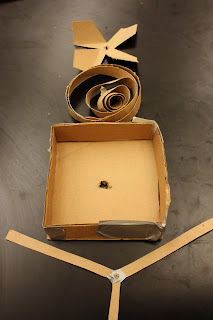